I am primarily interested in the science of miniaturization, for the surface area-over-volume effects that dominate all phenomena over microscopic length scales excite me as they do to any MEMS engineer. During the last 13 years, I have worked on several topics involving MEMS, nanotechnology and microfabrication concepts. My work has entailed both modeling and hands-on experimentation, with design, microfabrication and testing. Presently, I work on developing high aspect-ratio dielectric etch processes to enable cutting-edge tools for the semiconductor technology roadmaps.

My R&D experience in the semiconductor WFE industry is in the area of high aspect-ratio dielectric etch to enable future memory technology roadmaps. I have developed novel process formulations and qualified tool features to accommodate the shrinking lateral size and increasing vertical scaling of 3D NAND FEOL critical etch. Further, I have also addressed 300mm wafer scale uniformity issues and shown yield enhancements at customer fabs to qualify the N/N+1/N+2 nodes for high volume manufacturing. For slit etch step of the same nodes, I have demonstrated substantial throughput improvements in the etch process to pave the way for up to 35% time savings. In the case of Capacitor Cell etch for sub-50nm technology nodes, I have researched and created fundamentally new plasma etch regimes that overcome the limitation and trade-offs at tight pitch to deliver extremely vertical profiles that are essential for enterprise class performance. 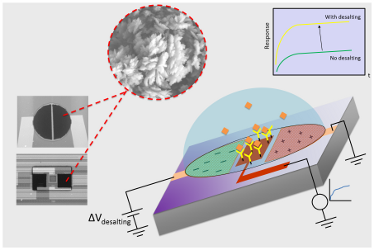 My doctoral thesis research was on studies of electrostatic control of ionic environments. Excess salt ions, which are necessary for biomolecule stability and function, cause extensive shielding of biosensors. I implemented a novel method to improve the sensitivity of a FET nanobiosensor through localized desalting. The end goal is to enable molecular detection from high salt buffers that are isotonic with physiological fluids such as blood, serum etc. Closely associated with this work is a deeper undertstanding of electrical double layers, which have adverse implications in highly saline media. Label-free detection with such a nanobiosensor is particularly beneficial for application at the point-of-care or other limited resource settings. 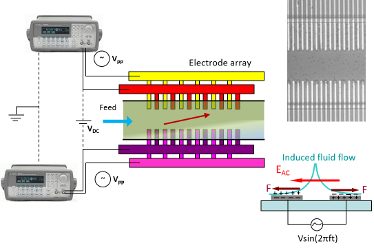 Dielectrophoresis, the conventional approach for separating microparticles, scales weakly in the sub-micron size regime. In order to improve separation forces, I demonstrated a microfluidic technique that leveraged enhancements through combined AC/DC electrostatics. This methodology can be extremely beneficial in separation systems and water treatment as upstream elimination of suspended colloids will prove highly economical for reverse osmosis desalinators whose performance typically degrades exponentially due to irreversible fouling. The size scale is also relevant for capture, patterning and manipulation of viruses and other macromolecules in biomicrofluidic systems.

What started as a side project, a rather casual exploration, led to one of my best demonstrations of micro/nanofabrication across multiple scales. In this work, I nanofabricated structures in single crystal silicon, using photolithography-free patterning and metal assisted chemical etching (MACEtch). I developed a technique for lateral etching of nanopillars into sidewalls of patterned substrates. This approach facilitates patterning multiscale hybrid structures in a rapid and highly scalable single mask process flow. Applications include microfluidic devices for rare cell capture, energy storage and nature-inspired hierarchical-reentrant structures for superhydrophobic surfaces (>170⁰ contact angle) with ultra-low hysteresis (<1⁰ sliding angle).

During my master’s, I demonstrated one of the world's tiniest micro fuel cell PowerMEMS, that performed with the highest combination of energy and power density. The research was focused on miniaturizing hydrogen sources, and integrating them with fuel cells into single power generators for MEMS and ultraportable devices. This is an area with proven opportunity, for developments in scaling down power sources have struggled to keep pace with MEMS/NEMS; the demand for packing more energy into smaller volumes has only been reasonably met in portable and mesoscale technology. Metal hydrides have been widely tipped as candidate fuels to enable the hydrogen economy, albeit fundamental issues that need to be addressed to integrate them with fuel cells. Using these metal hydrides as the source, I studied the effects of mass transport on hydrogen generation and fuel cell performance. During the intergration, I implemented a passive microfluidic control valve and surface tension pump for water transport to the hydrolysis reaction, resulting in a simple demand regulated hydrogen production and power supply.

Click here for a MechSE spotlight news article that was published on our micro fuel cell project.

Simulation and Synthesis of Compliant MEMS 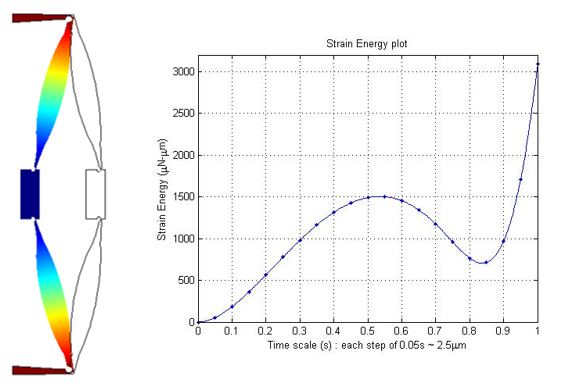 During my undergrad, I got my first experience in MEMS through internships and projects. I was awarded the JNCASR Summer Research Fellowship during which I worked with Prof. G. K. Ananthasuresh at IISc on modeling of electro-thermal-compliant microactuators. I followed-up on this with more research on compliant mechanisms and electro-thermal actuation to develop energy-efficient high force bistable switches. These devices are analogous to four-bar mechanisms, the links and joints here replaced by a single suspended polysilicon structure with distributed compliance.